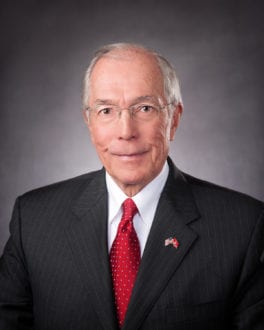 John L. Nau, III is Chairman and CEO of Silver Eagle Beverages, one of the largest Anheuser-Busch distributors in the nation.  Silver Eagle Beverages employs over 500 employees who service a territory that includes the greater San Antonio area in Bexar County and extends over 12 additional counties in southwest Texas. In addition, Silver Eagle Beverages distributes Grupo Modelo beers, a broad selection of national and local craft beers and several non-alcohol beverages and waters.

Nau’s commitment to service is apparent through a broad spectrum of participation in civic, community, and philanthropic organizations in Texas and throughout the country.  His current involvement includes Chairman of the Texas Historical Commission, National Park Foundation Board of Directors, American Battlefield Trust Board of Directors, Andrew Jackson Foundation Board, Abraham Lincoln Presidential Library Foundation Board of Directors, Baylor College of Medicine Board of Trustees, Gilder Lehrman Institute of American History Board of Trustees, University of Houston Board of Visitors, Honorary Trustee of Texas Heart Institute, Honorary State Trustee for the San Antonio Parks Foundation and Advisory Council member to the Center for Big Bend Studies.  He also serves as a Board Member for Friends of Vicksburg National Military Park, Houston Police Foundation, San Antonio Zoo, and The Admiral Nimitz Foundation.

He is a graduate of the University of Virginia and previously served on the Board of Visitors, a position appointed by the Governor of the Commonwealth of Virginia.  He is founder and President of The Nau Foundation.