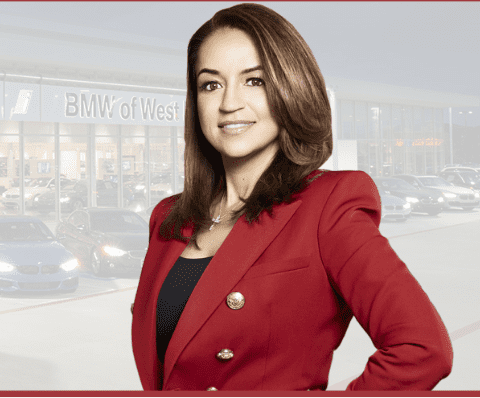 Maria Moncada Alaoui is the General Manager for BMW of West Houston on the Katy Freeway.

She’s been in the automotive industry for more than 20 years and held several positions, working her way up from administration to management.

Maria has been with BMW for twelve years and proudly serves as General Manager.

Moncada Alaoui attended Sonic Dealer Academy, and Sonic’s Leadership Academy which prepared her to become a dealer principal. Maria is an avid learner, and most recently a graduate and fellow of San Diego’s University Shakti Leadership Program. In her current role, she is responsible for operational and financial oversight, as well as customer and associate satisfaction and ensures the company is not only profitable but reaches its full potential.

Maria has been recognized as Executive of the year by the Mayor of Houston, Sylvester Turner, at the tribute to Hispanic Women. Moncada Alaoui was named one of the top 30 most influential women in Houston by Dmars, and in 2014 Mayor Annise D. Parker recognized Moncada Alaoui as “true role model and an influential community leader.” Maria’s tenure with Chevrolet earned her department #1 Chevrolet new car dealer of the year and with BMW her dealership received the honor of being named top 10% among the BMW dealerships in the nation and earned the prestigious Center of Excellence award. BMW of West Houston has recently been named Market One dealership in Houston within the BMW group and has received recognition as profile in achievement recipient many years in a row. Her store was selected to be the first future retail dealership giving consumers a glimpse into the future of car buying.

Maria is influenced by numerous individuals. From a personal perspective, she is influenced by her parents because they led a great example through their standard of integrity, hard work and high morals, Maria has learned what it takes to be an effective leader and good businesswoman. Maria is one of seven children and attributes her ability to work with large groups and in a competitive environment to her great family. From a business perspective, Moncada Alaoui is influenced by a couple of mentors she has met throughout her business career. She is inspired by their examples of hard work, dedication and commitment to excellence, Karen McKemie, the first female boss she ever had, who is tenacious and a big supporter. Moncada Alaoui is also inspired by Jeff Dyke, President of Sonic Automotive.

Maria is passionate about making a difference and giving back to the Houston community. She is involved with Women Driving Business, Bo’s place, The Lupus Foundation and The Houston Foodbank. Maria is also on the advisory council of Altus Global Network and has served on the board of The Latino Learning Center. Recently co-founded MPower serving to develop and empower women in the automotive industry. Nevertheless, what is near and dear to her heart are children in need and for the twelfth year in the row she and her dealership are proudly contributing to Houston Children’s Charity.

Maria is married to Omar, whom she credits for being her strongest supporter and source of encouragement. She has an amazing stepson, Joseph. When she’s not working, she enjoys spending time with her family going on long road trips in style with The Ultimate Driving Machine. She is a member of St. John Vianney Catholic Church.

A quote Maria remembers her mentor using and one she still refers to today is “Excuses are no more than an admission to failure.” “Essentially it means, whenever we begin to make excuses for why something didn’t work, we’ve already admitted defeat. Instead, we should use our energy to focus on what it takes to make it happen” Maria explained.

Recognized as Executive of the Year by the Mayor of Houston